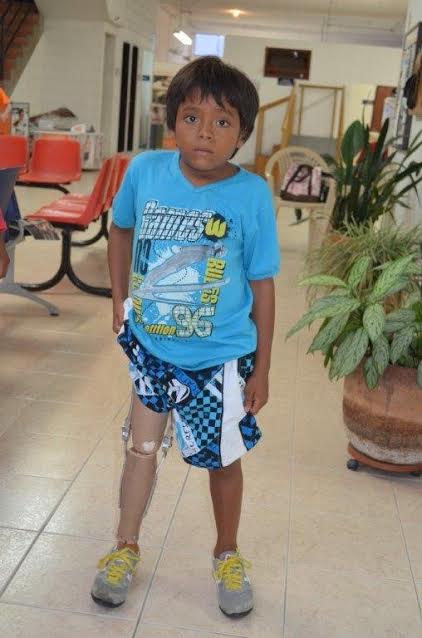 "Go out to play, I will call you when dinner is ready!"  These can be fatal words in Columbia, a country whose civil war left landmines buried all throughout the countryside.  Today, Columbia is the second worst country for loss of limbs to land mines, behind number one Afghanistan.

Enter our member,  Kent Questad. He learned the hard way what its like to loose a leg after an accident in college..  Kent also knew COLUMBIA, having spent a year there in high school,  With our ROTARY CLUB of SEATTLE NE, Kent turned his Columbia experience, Rotary contacts and  DIS-ability, into a SUPER-ability to help these disabled kids.

Kent knew what he had to do.  First, he presented to several area clubs to raise $2000.  These funds were then matched with a  ROTARY DISTRICT GRANT to making $8000 to fund an  innovative, prosthetic institute in Columbia called CIREC.   CIREC does remote, virtual 3-D sizing of kids legs in villages, and then creates prosthetics that are precisely sized and ready to fit these kids when they arrive for a  clinic appointment.

Thanks to Kent, the Columbia CIREC project is now applying for a GLOBAL ROTARY GRANT for over 100K,to ramp up tools, computers, and software.   This ROTARY GRANT should be sufficient to help them treat ALL these Columbian  kids, itching to mix it up with their "mates" in a good soccer match.

Rotary’s most notable current global project, PolioPlus, is contributing to the global eradication of polio. Sergio Mulitsch di Palmenberg (1923–1987), Governor of RI District 204 (1984–1985), founder of the RC of Treviglio and Pianura Bergamasca (Italy), was the man who inspired and promoted the RI PolioPlus vaccination campaign. Mulitsch made it possible shipping the first 500,000 doses of antipolio vaccine to the Philippines at the beginning of 1980. This project later gave rise to the NGO “Nuovi Spazi al Servire” co-ordinated by Luciano Ravaglia (RC Forlì, Italy). Since beginning the project in 1985, Rotarians have contributed over US$850 million and hundreds of thousands of volunteer-hours, leading to the inoculation of more than two billion of the world’s children. Inspired by Rotary’s commitment, the World Health Organization (WHO) passed a resolution in 1988 to eradicate polio by 2000. Now a partner in the Global Polio Eradication Initiative (GPEI) with WHO, UNICEF and the U.S. Centers for Disease Control and Prevention, Rotary is recognized by the United Nations as the key private partner in the eradication effort.

“We know that it’s a formidable challenge to eradicate a disease that has killed and crippled children since at least the time of the ancient Egyptians. We don’t know exactly when the last child will be affected. But we do have the vaccines to wipe it out. Countries do have the will to deploy all the tools at their disposal. If we all have the fortitude to see this effort through to the end, then we will eradicate polio.”[40]
It Takes a Community
Mobilizing more than 200,000 volunteers across 92 countries, the Rotary Community Corps expands Rotary’s reach by bringing the knowledge and talents of local people to projects in their communities. Discover how this program lets volunteers tap into our network to improve lives around the world.